Wages and the future of work 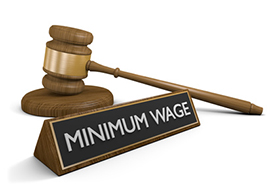 2018 began with questions about the basics of work. How much should employees be paid? What is the difference between a minimum wage and a living wage? Why should workers be paid more? What is the future of work itself, and how will new work arrangements affect employee compensation? Employers have much to consider and many challenges to meet.

Changes at the outset

An increase in Ontario’s minimum wage, effective January 01, 2018, provoked wide-spread discussion, not only about the exact amount workers should be paid an hour and whether businesses can afford to pay that amount, but also about the wider social benefits of what people earn and their contribution to the greater good.

Ontario is not alone. Quebec’s minimum wage is set to rise to $12 on May 01. Alberta’s will increase to $15 in October and in June, British Columbia’s will begin a steady rise to $15.20 by 2021. In other jurisdictions, the minimum wage is adjusted annually according to the rate of inflation or the Consumer Price Index.1, 2

What happened in Ontario

Following revisions to its labour laws, Ontario’s minimum wage rose from $11.40 to $14.00 on January 01, with a further increase to $15.00 an hour projected for next January. Reaction in some quarters was swift, notably from two Tim Horton’s outlets in Coburg, Ontario, owned by Ron Joyce Jr. Enterprises, Ltd, the children of the chain’s founders.3 Their response to the increase came in the form of a letter addressed to “team members” and describes decisions made as a result of “intense discussions with management and numerous small business owners in our area and other franchise owners.” Details include that employees are no longer being paid for breaks, certain incentives are being cancelled, and employees must now pay a percentage of the cost of their dental and health benefits, which employees may cancel as they wish.

Controversy from business owners and the public followed the increase and the response– especially the Joyce letter. It was the topic of the day on social media, in the press and in coffee shops – including on picket lines at Tim Hortons’ locations. Many business owners remain unhappy, especially with the size of the increase and speed with which it was implemented. With degrees of reluctance, however, they say they are making changes to cover their increased staffing costs.

At the same time, many people believe a higher minimum wage will ultimately be good for business and don’t consider the wage increase unfair. On January 10, the Toronto Star reported that in response to the controversy, Jeff Knoll, CEO of Film.ca Cinemas — a 12-year-old independent theatre in Oakville — had earlier written to his staff, saying in part, “We want each of you to know that we do not resent having to provide this increase as you are all absolutely worth it.” 4

In an opinion piece published on January 05 in Maclean’s Magazine, David Moscrop reminds readers that a minimum wage debate is “first and foremost about human beings.” 5 That debate is not simply a technical debate about economic policy in a free market; it is “bound up in social relations,” including relations of power and authority.  He concludes, saying that the debate lies at the heart of democracy in which the dignity and equality of each citizen is protected:

Our debate over how little a business can pay a worker is a debate about how we want to live together. It includes questions about what our values are, how we should organize our economy, how we expect markets will respond to changes, and how the political realities on the ground enable or constrain action.

Values in the workplace – A living wage

Moscrop’s characterization of minimum wage as “how little a business can pay a worker” runs counter to ideas about workplace wellness and philosophies focused on strategies for empowering workers to do their best for themselves and their organizations. The focus on values is captured better in the phrase “living wage.” While a minimum wage provides a wage floor for employers, a living wage is a benchmark of what employees must earn to meet their basic needs. According to Living Wage Canada, “The living wage gets families out of severe financial stress by lifting them out of poverty and providing a basic level of economic security.”6 It is not an arbitrary number but is calculated based on costs in specific locations and circumstances, including government transfers.

Living Wage Canada is a website/portal to facilitate learning and information sharing among communities across Canada that wish to support the working poor and to help build a national living wage movement. The site provides information for communities and for employers who wish to become “living wage employers.” The comparisons between minimum wages and living wages in Table 1 originate in Living Wage Canada reports. Note in each community, the living wage exceeds the provincial minimum wage, even in provinces where the minimum wage is increasing.

Many argue that the minimum wage should also be calculated locally in recognition of differences in the economic environment between big cities and smaller centres. For a detailed look at regional differences across Canada, see Tamsin McMahon’s 2014 analysis in Maclean’s Magazine.7

Trends for 2018 focus on the changing work environment because of advances in technology that will either lead to the elimination of jobs or their evolution as they are re-defined to augment technological change. Being locked into controversies over x or y dollars per hour obscures the longer-term reality – not that far away – that calculations of an hourly wage may no longer be the most effective way to pay employees or support a society in which everyone has opportunities.

Discussions about hourly wages are taking place within a context in which serious consideration is being given to alternative arrangements and other ways of organizing work. One alternative is to guarantee a minimum annual income in the face of massive changes to our understanding of work itself, how it is organized and how employers relate to their employees and other stakeholders in their organizations. A pilot is already underway in Ontario and data from an earlier pilot in Manitoba is being reassessed. 8

Harbingers of the future

In September 2017, the Toronto Star described how the use of new technology in the fashion industry is causing a “digital disruption” resulting in a return of jobs, once out-sourced off shore.9 In January, as the minimum wage issue was fading from the headlines, Amazon Go became a reality as a grab and go retail experience, in which a human checkout was replaced by cameras and sensors, while behind the scenes many people were working in new ways to make the concept happen.10 At the same time, Western media broke the story of a train station completed in China, in just nine hours by 1,500 workers, a realignment of work – not unlike traditional barn raisings, perhaps – that undoubtedly employed another mass of workers behind the scenes, organizing tasks in ways that might only be possible in an age of high speed computing power.11 These examples are both harbingers of the future and descriptions of current reality.

Much to think about

Gone are the days when a top-down memo will satisfy employees or the concerned public. It is a time for communication strategies that acknowledge the interests of employees as well as employers. It is also time to consider other perspectives. By shifting goals from how little employees can be paid to how much they are valued and what they need to live, a win-win transformation can occur. Without doubt, mandatory wage increases are challenging, as are new ways of organizing work. The flexibility to accommodate change while focusing on fundamentals like relationships and values will be a hallmark of future success. Meanwhile, today’s employers have much to think about. bh

1 Maclean’s. 2017, May 30. Minimum wage in Canada: By the numbers – Who pays what where and how it breaks down across the workforce. Author.

8 Delacourt, Susan. 2017, March 02. Guaranteed basic income on verge of take-off in Canada. iPolitics and The Tyee.