“Anywhere workers”: Workspace in the age of technology 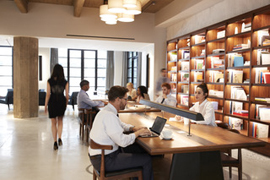 “When is a workspace a hotel and when is a hotel a workspace?” The answer is, “More often than you think.” Bigger questions include, “Are the lines between work and life becoming blurred?” “Is work/life balance becoming work/life integration?” If so, “What does the shift mean for employers?”

A new role for hotels

As 2018 closed, New York Times writer, Talya Minsberg, described a new role for hotel lobbies. No longer simply a place for guests to check in, they are being transformed into workspaces. Guests and even the general public are invited to take advantage of USB ports, unlocked Wi-Fi, unlocked washrooms and a variety of snacks on sale. Beginning with the Ace Hotel in New York, the trend has spread around the world. One brand, Moxy hotels, has even eliminated the front desk – guests check in at the bar where they get a room key and a drink.

Assessing the trend, Minsberg linked it to the rise of co-working spaces like WeWork that encourage collaboration in shared work spaces around the world. Since bh reported on WeWork a year ago, both the company and the concept have thrived. At the end of November, techvibes reported that 2018 was an “explosive” year for the company in Canada, with two new locations in Toronto, making six in total, and close to 5,000 members in the city. The company’s goal for Toronto is 20 locations by 2020 and WeWork also has other Canadian locations in Montreal and Vancouver.

It should be noted here that the New York based, global organization has spun off related initiatives – We Live, fully furnished apartments rented out on a short-term basis, and Rise by We, a high-end workout facility. The concept of shared work spaces focuses on more than simply where people accomplish their daily tasks. It merges work with other aspects of life as the lines between personal and professional blur.

On the one hand, the blurring of the lines is a sign that millennials are looking at work in a new way. On the other, it may mean an intrusion of one sphere into another. In July, for example, WeWork announced that meat is permanently off its menu. Globally, staff can no longer expense meals that include meat and the company won’t pay for any red meat, poultry or pork at WeWork events. Policy options may be available for individuals requiring “medical or religious” allowances. WeWork is not alone in having an anti-meat policy or in having similar policies related to reducing plastic use and redistributing food waste. In banning rather than discouraging meat consumption, however, the company is entering what was once solely a personal sphere illustrating that when the personal and professional spheres coincide, companies may be able to reach into unexpected areas.

The tools of technology have created new ways of collaborating and working, bringing new flexibility to the employment relationship. As Dean Douglas writes for Fastcompany,

Professionals in all industries are casting out the notions of work-life balance in order to build better work-life integration practices – where work and life are intertwined – by leveraging technology to make it happen.

Technology is changing where, when and how work gets done. In a survey led by Unify that captured data from the U.S., U.K. and Germany, 68% of people who described their teams as “very successful” have more than half their team members in different locations. The new “anywhere worker” can be successful working in a café or on a mobile device anywhere in the world. They also found that 79% of those successful teams were more likely to share a spontaneous idea on a virtual call than during an in-person meeting.

Among the casualties of the new flexibility may old approaches to work. Technology makes it possible to work smarter, rather than harder, and to think of work in a more integrated way. Instead of balancing two competing elements – work and life – the new paradigm looks for “synergies" between all areas that define “life" including work, home/family, community, personal well-being, and health.

While it is important to use words to describe new ways of working, in the case of the current shift, the clearest indication of what it means may be evident in how physical space is used. What is happening in today’s re-purposed hotel lobbies says a great deal about how work is getting done in an era driven by technology. Although WeWork has provided corporate leadership, it has actually capitalized on trends already in the air.

What employers  can do

For employers, the cues to how their employees work best may lie in how they use physical space and whether their people are, in fact, “anywhere workers.” Given the transformation of hotel lobbies, employers may want to consider how changes in their own space could increase productivity and worker satisfaction. Could areas in their own building be transformed with the addition of seating, tables with USB ports, and a strong Wi-Fi signal? Can benefits be modified to reflect an integration between the personal and professional, with perhaps greater accommodation for child care, elder care or personal wellness generally. Adapting to the new work paradigm may be easier than they think. bh